in China, the same brand
sewn onto my shirt, I try

to picture the rows
upon rows. Each skull back

turned toward a stitch.
What must be

women. Though it’s hard to say
through smoke. At a distance

billboards on this highway in Texas
I can’t quite read, though I squint,

pinch my thighs to keep
away sleep. Closer, closer

until I just
discern words. Dark on sharp

wallpaper. Now it’s back
to the Stones –

Pleased to meet you –
when I see it:

Jesus Saves.
And I want

to believe it, sure
Hell will be hot,

one circle filled
with weights to push

and push
for the wasters

and keepers of all
the gold beneath the moon.

Jen DeGregorio’s poetry has appeared in The Baltimore Review, The Collagist, The Cossack Review, PANK, and elsewhere. She teaches writing to undergraduates in New York and New Jersey, where she co-curates the Cross Poetry reading series in Jersey City and edits the companion online journal, Cross Review.

out of home movies, squeaking past the white

wands of papers rolled on driveways in the dark

and your Pop Warner pick-6 for the Merchants Bank Bucks,

past your bus before dawn in the spooky school lot,

past the smell of girls’ shampoo, blue

boulders in Albuquerque against your rickety back

and that day you stripped in the field behind the trailer

at the edge of woods.  If it mattered,

it doesn’t.  If it could have changed you in the world,

like that story you read in which Ancient Greece is back

on Earth, the Great War rages and North America is a plain of glass.

Even classic rock has abandoned the convention center.

a desiccant, lit your notes in unfamiliar classrooms, polished

white tile skittered with green, flecks the color of Soyuz,

More than the logic of your winning speeches, your seating charts

for the high-school U.N., your tournament trophies and plans

for the College of Electors, more than the slip-covered presidents

and all those tired teachers drinking coffee and Mylanta, remain

the strange sufficiencies of these objects resigned in time :

the first gray hair in seventh grade and the blue-and-gold anthology :

now all of them and Auden’s correction to Shelley, the torrent

of today’s dry creek bottom.  You miss your plastic Tri-corder, the

Your red pedal-car broke down years ago.  Hot sand fills your Converse

–the white-red cliff ahead a trunkless thigh in stone,

your pick-up how many miles back?

–all travelers in each annihilated place, each

dry creek that leads us past the moving, stupid monuments

in a capital beset with marble.  Tell the half-

in orders of magnitude.  Flycatcher, willow and vermillion, axles

broken in a grove and degrees, hasten the histories

of vista rest-stop plaques to the first American names,

one of which was her finger sliding a button through a slit.

–You could call the roll but instead you build this anachron from scrap again,

obscure schematics scratched in bloody angles on your skin.

No one cares.  What is there to legislate now

that you check the Real Age, which is

47, ballots rusting in the garages of code geeks

and student-council treasurers?  There is

a cottonwood.  Before that,

a prior tree, and after that,

Christopher Cokinos is the author, most recently, of Bodies, of the Holocene and is co-editor of the forthcoming anthology The Sonoran Desert: A Literary Field Guide.  He has poems recent or forthcoming in Borderlands, Front Porch, GeoHumanities, Orion, TYPO and Ecotone, among other places. In Tucson, he directs the creative-writing program at the University of Arizona. In Logan Canyon, Utah, he reads books instead of e-mails. He is at work on a new nonfiction project tentatively titled Re-Civilization: Six Heresies to Keep a Planet Running. His poetry collections The Underneath and The Archive of Obsolete Futures are circulating.

Sometimes I feel as if I’m losing my balance,

leaning too far or falling over,

not like James Stewart in Vertigo who experiences a sense of rotational movement as if the scene is unscrewing itself,

I think it has something to do with the absence of completeness,

the feeling of incompleteness.

I try to lean over without falling over.

In the film the camera pulls away while at the same time zooming in,

which causes the background to dissolve, as when you hold onto something that doesn’t exist.

It is true, longing is often associated with loss like a kind of negative pressure pushing you away from yourself.

It turns out she is willing to be somebody else in order to be loved.

She doesn’t need to be herself.

You trust your feelings, or whatever it is that enables you to feel loved,

even if you’re not real.

An individual is never more alone than with a person who doesn’t exist.

It is often the case that we end up losing what’s real in order to preserve something we imagine.

You lose your balance when you don’t exist,

Sebald’s narrator moves from place to place but finds he cannot escape the contracting sickle-shaped circle of his feelings,

as if the trip is a loop that adjusts to his longings.

There is nowhere to escape to.

There are only lines in the mind, keeping out and letting in,

depending on which side you’re on.

For the most part I don’t think our feelings have a clear sense of their own incompetence.

There is probably more longing than is actually necessary, for instance,

although without it the feeling of loss would increase suddenly,

like one of those balloon payments that gets people into trouble.

Michel and Frantz in Algeria, skies a species of red

with pulpy squash, speaking of particularities and

from structuralism’s elemental lens.  One an acolyte of

Césaire, the other believing in himself, each yoked to

France, not to the same oppressions wrought by their

pais where skies might also be orange, but not in Kabyle

sunlight. Their paradigms different but not opposed,  a

parallel aesthetics united by two doctrines of power at

specific and abstract, familial and civic, intimate and

herding their harems, all driven to madness by structures

stressed by iterations of lagging time (T) and wasting

proud of, no longer defined by slavery or civic war

white men convene in rooms redolent of wood and

plus interest, for those with surplus to invest in a Forever

Ring of new frontiers and endless possibilities, and

everything that happens is material for another reinvention.

Even suicide begets a new fiction for reading or for living

or for wearing, and progress is equivalent to curating

any landscape or border, including alien bodies or

nation-states across oceans or deserts or planets,

requiring only that America keep her facts straight or that

she preserve order by other means. For what is power but

of solitude, perturbation of boundaries) unless power turns

contingencies where leverage is equivalent to force (F)

Phenomenology of madness feels gray as sky before

storming, not solid gray but penetrated by silver, black

and fading light like the time after harming a lover or

a child, breaking their hearts forever as Foucault broke

our hearts by dying in a way opposed to our translations

of his canon, coercion and surveillance, Gordian rules

grooming, algorithms expressed in numbers or other metrics

harboring their own syntax, quantities and characters,

“reflective gaze of lived experience” as he gazed upon us

as his own amuse, detached and hiding from his acolytes—

like Binswanger, failed to detect his worship of the “unlivable,”

(Perception) are indivisible, that black and white are the same

and ahistorical, a singular claim on phenomena removed from

Hegel’s logos, that interactions constitute a process rather than

a truth-claim. His color was gray, then. We gave Foucault

mercurial power to drive us, without certainty, into the coming

Clara B. Jones is a retired scientist, currently practicing poetry in Asheville, NC. As a woman of color, Clara writes about the “performance” of identity and power, and her poems, reviews, essays, and interviews have appeared or are forthcoming in numerous venues. Clara studied with Adrienne Rich in the 1970s and has studied recently with the poets Meghan Sterling and Eric Steineger.

no greens no grays

no tremor in the afterglow

no strophic slaughter to the lamb

no people of tomorrow

no one to listen as it plays

Adam Fagin’s poems have appeared in Boston Review, Fence, VOLT, and a number of other places. He has a chapbook out from Little Red Leaves called T’s Alphabet. Another chapbook, THE SKY IS A HOWLING WILDERNESS BUT IT CAN’T HOWL WITH HEAVEN, will be out soon from Called Back Books.

Whose name will sound among the fields?
Whose battle-cries will grind the grain?
Once, learned men and layfolk both
swore Basque and shouted English oaths:
“Help, Holyhead!” “Saint George, to me!”
were then in fashion, for we feared
the noble deeds their troops had done.
A new language always comes.

After those two, Breton displaced
the Basque and English from our lips.
Their fame exploded! No one clung
to words outworn, outmoded songs,
and all you heard was, “By God’s grace!”
from every father and his son.
The mad spoke Breton, and the dumb.
A new language always comes.

Forgotten now, no longer good,
Breton’s found peace with last year’s coins.
We only speak Burgundian!
“No god for me” — all in one voice.
You might well ask, which, of those four,
is worth the ransom, at this price.
I’ll shut up now: my song is sung.
A new language always comes.

Prince, which people will have won
the “title,” “name,” or “lawful right”
to grind the grain today? Tonight?
A new language always comes.

Samantha Pious is pursuing a Ph.D. in Comparative Literature at the University of Pennsylvania. Her first book, A Crown of Violets (Headmistress Press, 2015), offers a selection of the French poetry of Renée Vivien in English translation. Some of her individual translations and poems have appeared in Adrienne, PMS, Lavender Review, Mezzo Cammin, Lunch Ticket, and other publications.

Eustache Deschamps (1340-1406) was a poet whose work in forme-fixe revolutionized the style and content of French poetry. Rather than confining himself to courtly love and chivalry, Deschamps adopted more accessible concerns as his subject matter, while maintaining that poetry did not need to be set to instrumental music, since it possessed a “natural music” all its own.

“A woman receives a phone call from her dead mother. Meanwhile, elsewhere, another encounter takes place.” 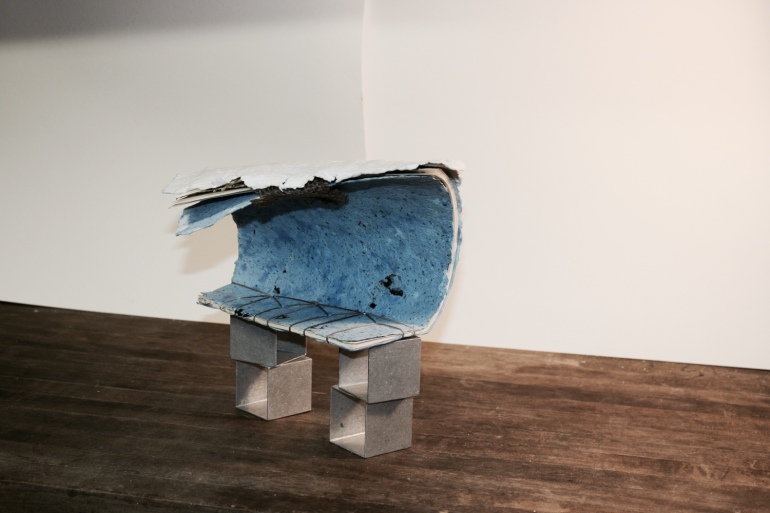